Over the past several months, Mine Workers have marched in the streets of St. Louis to protest Peabody Energy abandoning its former employees. On three occasions, miners have locked hands in the streets in a boisterous nonviolent protest, singing “Amazing Grace” as they waited to be arrested. 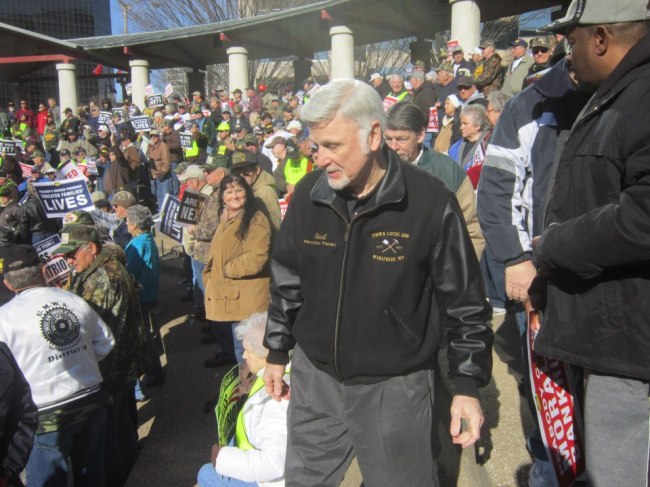 Invoking the words of Jesus and passages of scripture, they have asked why courts would allow workers to be persecuted, denying them the benefits they were promised. They are asking for fairness. They ask: If we allow corporations to use the bankruptcy courts to dump retiree pensions and health care, what kind of society are we?

The question will be raised again on Monday, April 1 in the streets of Charleston, W.Va., with more than 5,000 miners and their supporters rallying outside the downtown headquarters of Patriot Coal, the shell company that was created by Peabody and Arch Coal to take over their obligations to employees, and then fail.

I’ll be there and blogging live via http://fairnessatpatriotnow.blogspot.com/, and posting here about the rally later in the week. You can get more details at http://www.fairnessatpatriot.org, and at Fairness at Patriot on Facebook.

So much is at stake, not only for retirees and their families, and for active miners and their communities, but also for every retiree depending on company-provided health care and pensions. Too often in recent years, companies have sought to dump these obligations through the bankruptcy courts. It’s in everyone’s interest that we stop it here.

The Mine Workers are taking a valiant stand, invoking not only history but also a Christian spirit that they argue should infuse the court’s deliberations. This is about fairness, about human dignity, about respect for family and hard work. This is about faith, perhaps even resurrection for struggling mining families.

The Mine Workers have come home to Charleston, seat of the bustling coal mining industry for nearly a hundred years, to state this case clearly. West Virginians understand the sacrifices that coalmine families have made to support mining in Appalachia, to build prosperous and promising lives.

Listen to these stories, sung so well by Tom Breiding of Pittsburgh, about the fight for fairness against Peabody and its agents:

1 thought on “Roll Away the Stone”