This week the historic Des Plaines Theatre in suburban Chicago is undergoing a rebirth with the world premiere of “Etude: The Musical,” an ambitious production that tells a love story spanning centuries, connected by myth, music and the arc of history. “Etude” presents a new take on the classic battle between good and evil, challenging the audience to sort it all out while also embracing the bloodthirsty characters. 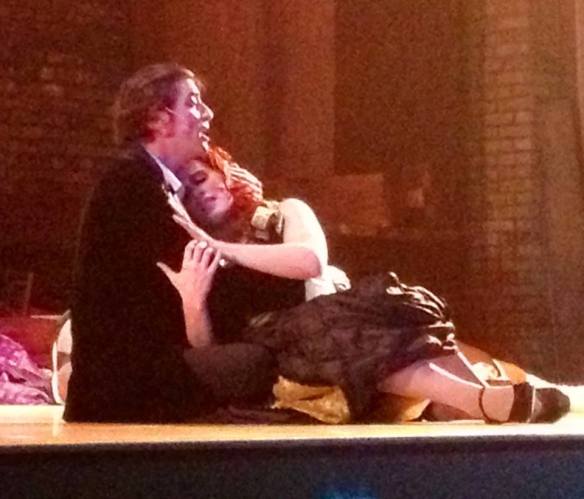 “Etude” is based loosely on the life and mysterious death in 1888 of French composer and virtuoso pianist Charles-Valentin Alkan. In the new musical, produced by Jerry and Michael Sigman, nephews of the legendary Tin Pan Alley lyricist Carl Sigman, Alkan never really dies. Instead, he is seduced by the voluptuous vampire Regine, who promises him eternal life and musical pleasure.

The musical brought us to Chicagoland for opening night of “Etude” because daughter Miki stars as Regine. Like other members of the talented cast of 23 singers, actors and dancers, Miki has been working part-time on the musical for nearly a year – and it continues to be a work in progress as they refine and expand the complicated roles and story before live audiences.

More about the musical and opening night performance in a bit, but first let’s consider this love story and how it came to be. There is more here than meets the eye. And the history is both personal and civic for the Sigman Brothers, who grew up in Des Plaines and dreamed of musical adventure and the big stage while attending performances at the old Des Plaines Theatre.

Jerry and Michael Sigman formed The Sigman Brothers Production Company “to foster an artistic environment that inspires the creation and staging of new and original theatrical works of all genres, and to preserve and extend the storied tradition of the American Theater,” according to their website.

The Des Plaines Theatre was built in 1925 by the Chicago Polka Brothers to be a suburban mecca for that unique European dance music. It went through several refurbishments over the next 40 years, hosting vaudeville acts and first-run shows. A fire in 1982 damaged the storefront, but the theater was largely spared. Unfortunately, its fortunes sank with live productions and eventually it was converted into a movie theater that ran mostly Indian-language Bollywood films. 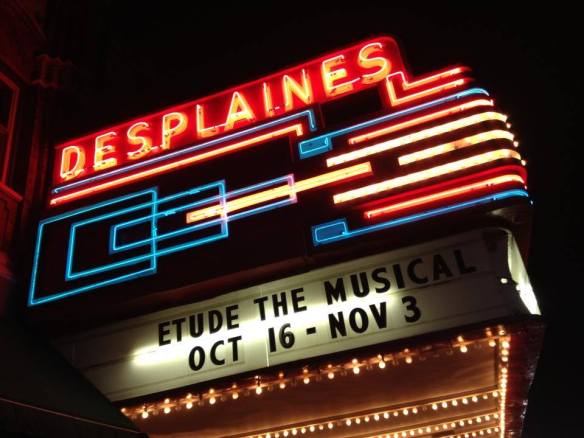 The Sigmans mounted a “Kickstarter”-style campaign to raise funds to restore the stage, and wrote “Etude” as the kickoff for a new “artistic environment,” in the Sigman’s vision. Jerry, who has performed in Chicago as an actor, singer and magician over 25 years, wrote the book for “Etude.” Older brother Michael, who composed the music, has earned five degrees in music composition, theory and history. The Sigman Brothers make clear that their work is inspired and directed by the memory of their uncle, Carl Sigman.

If the name Carl Sigman doesn’t ring a bell, it’s because the great American popular music lyricist has not been properly toasted over the years, certainly not in the Chicago area. You will know his songs, for sure, including this revived jazz standard, given words and wings by Sigman after the music, composed by Francis Lai, was a hit movie theme in 1971.

Sigman collaborated with some of the greatest music composers of his day, from Duke Ellington to Johnny Mercer, Lai and Jimmy Van Heusen. His songs were hits for Frank Sinatra, Billie Holliday, Joni Mitchell, Van Morrison and many others.  I have been obsessed by some Sigman tunes since high school, even mastering the karaoke versions of “Ebb Tide” and “It’s All in the Game.”

And then there is this great, fun piece given rhythm and bop by New Orleans Italian jazzman Louis Prima:

Jerry and Mike Sigman would like to return the Des Plaines Theatre to the pinnacle of Chicagoland stage, and the community should applaud them for investing the time and money into “Etude.” As students of music and history, they have created a fantastical tale. I’m especially grateful that Jerry saw the spark in Miki during auditions and selected her for the lead female role.

And you can’t help but be proud of all the cast and creative direction for “Etude.” The music soars in the first act, but seems to make a rough transition to the second act, when the classical composer and his vampire queen return to modern life in a punk rock band. Also, some plot twists are not wrapped up neatly as we move toward the denouement of the tale.

Aside from an uneven dance opening, the dance performances were outstanding – including the nicely choreographed and amplified swordplay as bloodsuckers of every stripe clash again and again. It wasn’t quite clear what the life of these vampire heroes involves, but that is a small detail when set against the timeless love story unraveling onstage.

The Sigmans have created a love story that comes from the heart of the American music experience, channeling their uncle as they explore the music thread that underlines our cultural history. Yes, the plot gets stretched a bit thin in places, but it’s easy to overlook those moments when another lively song and dance ensues. Humor infuses the dialogue, and nice physical comedy helps carry it off.

The Sigmans may be trying too hard to meld the history of 150 years into their tale, and a lengthy historical video that leads into the second act mixes images of politics, war and disaster along with popular culture and vampire movies. They’ve used this video in promotions, but they might have been better served on stage by using dancers to create the allusion of moving through time, communicating not boring topics but the overall themes of the play – love and passion.

It was interesting at the end of the opening night to see the cast gather on stage for champagne and congratulations. How can we make it better tomorrow, they asked. Some among the production team wanted to cut specific scenes, to make it move faster and trim the two-and-a-half hour two-act play to keep the audience riveted to their seats.

But the music and performances were stellar, so most of the cast resisted efforts to cut their babies. At least subtle changes will be made, for sure, just as the producers of “Next to Normal” refined the future Tony Award-winning musical during its run at Washington, D.C.’s Arena Stage. Unfortunately, “Etude” was not destined to live much longer than Halloween 2013. But these things have been known to come back to life.