We’re about to learn a lot more about the Koch (pronounced “Coke”) brothers, despite their best efforts to hide behind the myriad front organizations they use to funnel cash to politicians who’ll do their bidding. “Citizen Koch,” a documentary about their power play in Wisconsin to eliminate bargaining rights of public employees and undermine labor protections generally, begins a limited run in theaters next month after being pushed off the PBS calendar by the Koch brothers, among the biggest contributors to the Corporation for Public Broadcasting. 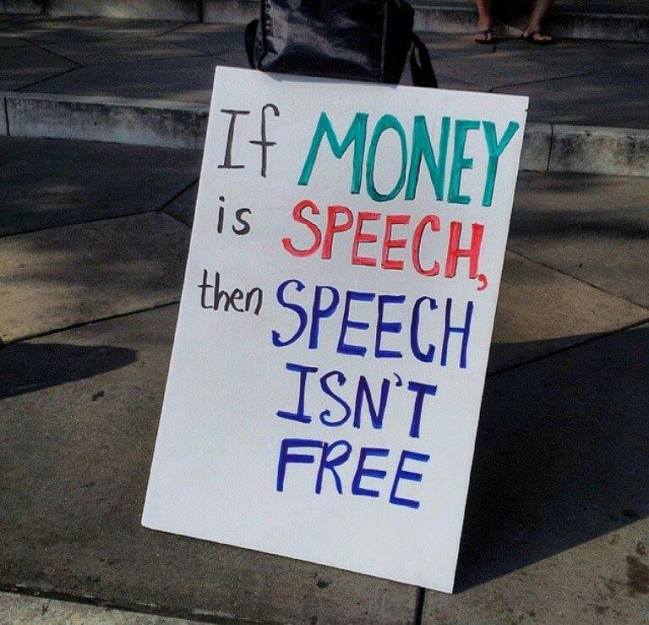 Another movie, Robert Greenwald’s 2013 “Koch Brothers Exposed,” has been updated with a 2014 edition to show how the industrialists have been further empowered by Supreme Court rulings allowing corporations and individuals to spend unlimited sums in election campaigns. The Kochs have attacked Greenwald’s film relentlessly, right up to the preview this week by House Minority Leader Nancy Pelosi on Capitol Hill. You can view it here.

Greenwald reveals how the family’s $100 billion fortune has been amassed through oil and gas pipelines – beginning with father Fred’s business laying pipelines for Josef Stalin in the 1930s – and investments in industries like paper and plastics. Koch Industries is one of the nation’s top 15 polluters, accounting for more than 300 oil spills. It was found guilty by a federal jury of stealing oil from Native American lands. The company has paid more than $100 million in fines.

After spending $122 million trying to defeat President Obama and other Democrats in 2012, the billionaire oilmen are reportedly spending $125 million during this off-year election, flooding different regions with market-tested ads, trying to lay the ground for more gridlock and their own guy in 2016. The unrestrained power of “Citizen Koch” is scary, frankly. If the Kochs go unchecked we are facing the threat of corporate oligarchy. It may already exist in practice. 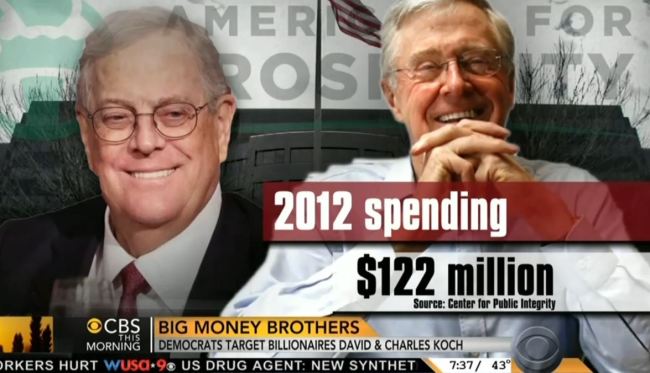 That’s why I’m watching both these Koch films (Citizen Koch plays downtown D.C. on June 20) and passing along as much information about them as I can. Here‘s the nationwide schedule for the Citizen Koch showing. Check out the links in this blog, and tell me what you know. Nicholas Confessore of The New York Times recently penned a revealing portrait of the Kochs’ political odyssey over the past few decades. Back in 1980, when David Koch was running for vice president on the Libertarian Party ticket, which favored “the repeal of the fraudulent, virtually bankrupt, and increasingly oppressive Social Security system.” his brother Charles objected to a $2.5 million political expense. Today they spend that much in a week.

Besides more than a hundred million Koch dollars that go to front groups like the ubiquitous Americans for Prosperity, which in turn fronts for numerous Tea Party chapters, hundreds of millions more are leveraged from other right-wing individuals and groups. The Kochs, in effect, are the bagmen for a vast right-wing conspiracy that Greenwald estimates spent $400 million in 2012 alone. This is not including the right-wing think tank echo chamber headed by the Kochs’ own The Cato Institute.

While the media has focused largely on the Kochs’ massive national political machine, the brothers have been even more diabolical at the state level, where they fund the American Legislative Exchange Council (ALEC) to draft model legislation and talking points for state legislators, and canned editorials promoting the legislation that local newspapers snap up to fill column inches.

The result is a rash of bad, even dangerous, legislation – including the “stand your ground” laws that George Zimmerman used as a shield to shoot and kill an unarmed Trayvon Martin. Especially troubling to me is the Kochs’ assault on unions, not only collective bargaining but also pension security. Most recently, the Koch brothers’ Americans for Prosperity mounted a targeted strategic campaign to scuttle a Michigan state relief plan for the City of Detroit that would move the city toward solvency while minimizing pension cuts and saving the art library.

MSNBC’s Chris Hayes asks the right question here: “Who do you want to see suffer?”

As the New York Times’ David Firestone opined in the paper’s editorial blog:

“Under the circumstances, the proposed state contribution on behalf of vulnerable pensioners is a modest way to make up for Lansing’s decades of abandonment. But it’s too much for the Kochs to stomach. They apparently want city workers and retirees to publicly suffer for the sin of having been union members. They want bondholders and insurance companies at the front of the creditors’ line, and don’t seem to care if the Detroit Institute of Arts has to sell off its paintings and sculptures to put them there.

“As they have in so many other areas of public life, two of the country’s wealthiest citizens are using their good fortune to make life far more difficult for those at the bottom of the ladder.”

The Kochs’ pension shakedown is in keeping with the brothers’ longtime effort to change Social Security insurance into a more Wall Street-friendly investment fund, spending millions to scare Americans into believing Social Security is in peril, when it’s not. They want all pension money invested in the stock market, where the risk is high for individual investors and the reward high for the institutions. The Kochs want a piece of that giant pension pie.

We can’t let the Koch Machine run our country. Arm yourself with information. Spread the word.

Over the past several months, Mine Workers have marched in the streets of St. Louis to protest Peabody Energy abandoning its former employees. On three occasions, miners have locked hands in the streets in a boisterous nonviolent protest, singing “Amazing Grace” as they waited to be arrested.

Invoking the words of Jesus and passages of scripture, they have asked why courts would allow workers to be persecuted, denying them the benefits they were promised. They are asking for fairness. They ask: If we allow corporations to use the bankruptcy courts to dump retiree pensions and health care, what kind of society are we?

The question will be raised again on Monday, April 1 in the streets of Charleston, W.Va., with more than 5,000 miners and their supporters rallying outside the downtown headquarters of Patriot Coal, the shell company that was created by Peabody and Arch Coal to take over their obligations to employees, and then fail.

I’ll be there and blogging live via http://fairnessatpatriotnow.blogspot.com/, and posting here about the rally later in the week. You can get more details at http://www.fairnessatpatriot.org, and at Fairness at Patriot on Facebook.

So much is at stake, not only for retirees and their families, and for active miners and their communities, but also for every retiree depending on company-provided health care and pensions. Too often in recent years, companies have sought to dump these obligations through the bankruptcy courts. It’s in everyone’s interest that we stop it here.

The Mine Workers are taking a valiant stand, invoking not only history but also a Christian spirit that they argue should infuse the court’s deliberations. This is about fairness, about human dignity, about respect for family and hard work. This is about faith, perhaps even resurrection for struggling mining families.

The Mine Workers have come home to Charleston, seat of the bustling coal mining industry for nearly a hundred years, to state this case clearly. West Virginians understand the sacrifices that coalmine families have made to support mining in Appalachia, to build prosperous and promising lives.

Listen to these stories, sung so well by Tom Breiding of Pittsburgh, about the fight for fairness against Peabody and its agents:

Patriot Coal has asked bankruptcy court to terminate all retiree health care obligations and radically restructure its collective bargaining agreement with the United Mine Workers of America, essentially a nuclear option that promises to intensify the heat in the streets of St. Louis, where coal miners have come to demonstrate and go to jail if necessary to make their public case.

The bankruptcy court motions are “totally unacceptable, unnecessary and put thousands of retired coal miners, their dependents or their widows on the path to financial ruin, worsening health conditions or even death,” UMWA President Cecil E. Roberts declared.

The union stepped up its criticism of Peabody Energy and Arch Coal for using the Patriot shell company to dump their pension and health care obligations. Most of the miners affected are former employees of Peabody or Arch and never worked a day for Patriot Coal.

“Patriot is now the vehicle through which Peabody’s and Arch’s scheme to rid themselves of their long-term obligations to these retirees is playing out,” Roberts said. “But that does not absolve Patriot.”

The union has been negotiating with Patriot to reach a fair agreement and Roberts vowed that those talks would continue. “We remain on two paths in our fight for fairness and justice,” he said. “We will continue to meet with Patriot in the hopes that something fair for both sides can be worked out.

“But at the same time we will continue to make our case in the streets of St. Louis, in Charleston, W.Va., and anywhere else we need to be,” Roberts said. “Lawyers will do what lawyers do, courts will do what courts do. What working families do when they fight for justice is get out, get loud and demand to be heard. We will continue to do that.”

Expect the volume to rise in the streets of St. Louis next week. Here’s how the Mine Workers are making their case to the people of St. Louis in a new TV spot: